The Supervision and Safety (ASI) division is responsible for all duties of the SFOE in the areas of supervision and risk and safety management. The division plans annual audits of external institutions which manage federal government subsidies and is responsible for the development of the conceptual principles of risk management. It also implements the national strategies for Critical Infrastructure Protection and to guard against cyber risks in the energy sector. By establishing an emergency, crisis and continuity management system, the division makes it possible for the SFOE to maintain services even during exceptional situations.

It is also responsible for the structural safety, the supervision and the emergency planning for Switzerland's more than 180 large dams which are under the direct supervision of the federal government. It is also the highest supervisory authority for smaller dams and reservoirs that are supervised by the cantons. Similarly, in the technical risk sector, the division monitors the construction and operation of pipelines (gas, oil), which are directly supervised by the federal government, and is the ultimate supervisory authority for pipelines supervised by the cantons.

The division is responsible for national control and inventories of nuclear material as well as further supervisory tasks incumbent on Switzerland from bilateral and multilateral agreements relevant to non-proliferation of nuclear weapons, control of exports of nuclear goods and the nuclear fuel cycle.

The secretariat of the Swiss Federal Nuclear Safety Commission (NSC) in Brugg is administratively affiliated to ASI. Further, ASI chairs the Coordination Commission of the Federal Inspectorate for Heavy Current Installations and on behalf of the SFOE, ASI has a permanent seat on the Federal Crisis Management Board NBCN.

According to the SFOE's rules of procedure, the Supervision and Safety Division is responsible for all tasks of the Office in the areas of risk management and safety supervision. It is precisely because of the broad range of tasks involved that there is a need to live a uniform supervisory and safety culture. It must correspond with the Federal Administration's Code of Conduct and the SFOE's overarching mission statement. The associated values and premises of this culture have been codified and made visible in the form of principles through the AKAS project. These principles have been set out and visualised in an explanatory video.

The principles developed in the AKAS project can be presented in the form of three pillars (dimensions) that support the SFOE's supervisory and safety culture. 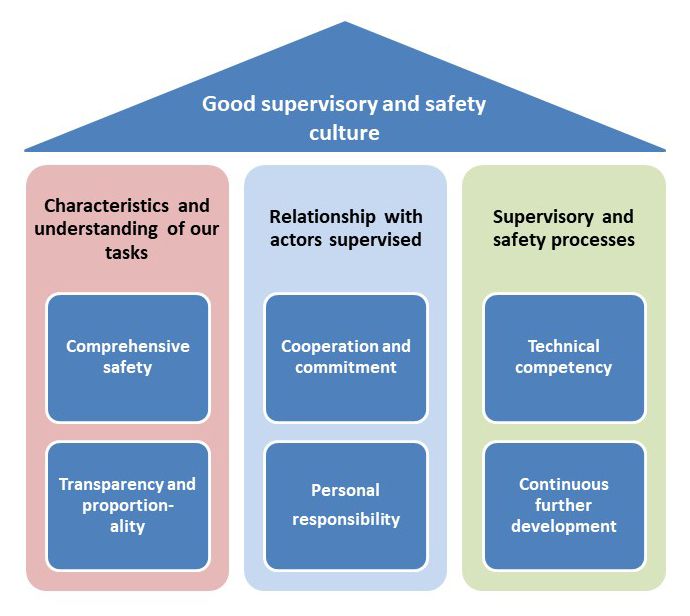